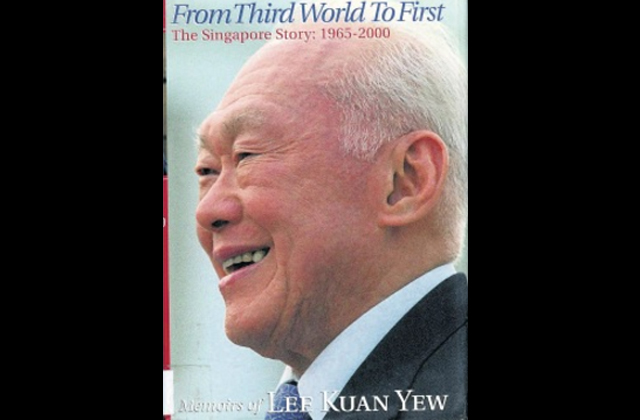 Each of us who came to Singapore have the different experiences. Some people see this as a stopover to relax for a few days right with lots of fun. Some people enjoy the civilized, rich, fresh and clean in Singapore. Some people complained that it was a municipality boring, boring weather and cold natives.

But today, we will not discuss here his personal comments about Singapore. Instead I want to introduce to you the story of a Singapore rose from the wreckage through the words of Lee Kuan Yew – the first Prime Minister of independent Singapore. Memoir entitled “From the first to the third world – The Singapore Story: 1965-2000”, which was translated into Vietnamese with the title “The secret dragon”.

If you’ve ever watched the TV series “Growing up” somewhere ago 10-15 years, will see the country’s ever more arduous and how conflicts.

Independent Singapore began to appear from 1965, after the forced separation from Malaysia due to ethnic conflicts and macroeconomic development policies. Singapore’s situation worsened to severe. No army of its own, secure the entire island under the protection of British troops and two battalions of Malaysia. Undertakings to Malay rulers and repressive attitude of the Malaysian Chinese community caused discontent flee to Singapore, aroused strong prejudices among communities here.

Extremist faction leaders in Kuala Lumpur are still looking for ways to beat Singapore to make a submission returned to their states.

Incessant riots took place until the early 1970s when Singapore established security forces and multi-ethnic army of their own, free from the influence of the military protection of Malaysia. However, Singapore during these years were in direct confrontation with the Muslim world.

The next problem is economic. Capital Singapore is just a transfer station and trade goods by the British created and controlled by Malaysia. As independent confirmation, the role that Malaysia was also withdrawn. Singapore now almost exclusively can cling to is the manufacturing industry is operating on the island of the same demand from the British garrison (accounting for 20% of GDP, provides 70 thousand jobs directly and indirectly). But the British were eager to retreat.

Through the words of Lee Kuan Yew, you’ll see a country that Singapore had been poverty and backwardness, low-skilled workers and the old-fashioned way of thinking of the people. You will see a small, weak country lived the first years of fears colonial garrison withdrew, leaving a chaos area. Assets they can then just “trust and confidence of the people”, the unique natural advantages, “a natural port of world-class set in a strategic position of a road the world’s busiest sea. “

And you will see a mere 640 km2 country with two million inhabitants has been gradually rising in revolt, his own strong improvement to become the economic powerhouse it is today.

A fragile national nascent need international recognition, the need for policing and national defense and economic development. At the same time, they face many other problems. How to national reconciliation? How can you develop the quality of labor? How to create a fair society? How to build government integrity and transparency? How to integrate with the world? By pragmatic approach, not influenced by the ideas available at its heart, the government of Singapore’s Lee Kuan Yew began outlines each pressing issues of the country and solve them step by step.

Have to say, the process of transformation of Singapore’s strategic set of groundbreaking, unprecedented in history. Typically, the Lee Kuan Yew flatly refused foreign aid to stimulate people’s wills. He once said: “The world does not owe us a living. We can not live by begging bowl “. Instead, the government used a property that British troops leave, turning them into industrial parks, tourist attractions, ignoring the neighboring Asian countries to call for investment from the West.

Through this book, you will know Singapore has become the financial center of Asia alongside Hong Kong and Tokyo like. Why small country that gently overcome the oil crisis of 1973, the financial crisis in 1987 and 1997.

You will also learn about social welfare policy priority of the Singapore Vietnam – CPF funds – and its profound impact on labor productivity, health policy and retirement, home ownership issue, even even the thinking of generations of future citizens.

One thing I particularly like in this book is the author’s way to lead. He recounted the incident in a pure and simple, takes the reader through each important details of the times and the critical analysis of the macro-policy decision, by himself and his colleagues. Hardly at all, a book about politics to become close and so vivid. It makes “secret dragon” is no longer simply a memoir, a chronicler but also a valuable reference for those who are quiet because national priority. You will find in the country that causes a race three Chinese, Malay and Indian to choose English as the official language; how to train and attract talent; or diplomatic strategy of a small state when any neighbor always alone many times stronger.

Above all, you will find here the boiling of an era, the iron will of an individual country on the banks of doom, and lofty ambitions of those who willingly devote his life to the motherland . You can not minded the author, engage in politics, but the enthusiasm and the knowledge that he left on the page absolutely be useful to you on your own path. And maybe, you will find more love Singapore.